The Honda BEAT Version Z '93 is a Road car produced by Honda. It first appears in Gran Turismo 2, and has returned in every main game since, except for Gran Turismo 3: A-Spec and Gran Turismo Sport.

There are two colors available for this vehicle:

This car can be bought at the Honda Used Cars Dealership for around 9,300 Credits. The car's name is listed as Honda BEAT Version Z '94 in this game.

This car can be bought at the Used Car Showroom (Early '90s) for around 7,200 Credits. The exact price of the car may vary depending on the mileage.

As a Standard car, the Honda BEAT Version Z '93 can be purchased from the Used Car Dealership for 11,013 Credits. It is a Level 0 car.

This car can be purchased for 14,500 Credits. It has a simple interior. 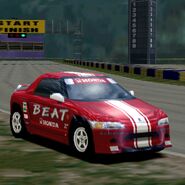 Retrieved from "https://gran-turismo.fandom.com/wiki/Honda_BEAT_Version_Z_%2793?oldid=143716"
Community content is available under CC-BY-SA unless otherwise noted.