The Honda HSC "The 37th Tokyo Motor Show Concept Car" '03 is a Concept car produced by Honda. It first appeared in Gran Turismo 4 Prologue, and has returned in every main game since, with the exception of Gran Turismo Sport.

The Honda HSC Sports Concept Car was first announced at the 37th annual Tokyo Motor Show in 2003. It was thought that the car would become the next-generation NSX. The HSC's exterior dimension of 167 inches, 74 inches and 44 inches, overall length, width, and height respectively, were nearly identical to those of the NSX. With its DOHC V6 mounted amidships, the drivetrain layout was also the same as Honda's flagship sports car.

The HSC's styling was aggressive and sporty. It's wide, low nose, highlighted by canted fixed headlights, made it stand out in a crowd. The major visual difference between it and the NSX were the HSC's sharp waistline and shape of the rear end, characterized by distinctive-looking taillights. Unlike, the NSX, however; the HSC featured a short rear overhang, which made the profile of the car seem more compact than that of Honda's production sports car.

Power of the 3.2-liter V6 was rated at more than 295 HP, making it a potent performance vehicle. The HSC also boasted a whole slew of new equipment that included small CCD rear-view cameras that replaced the side mirrors. Also, the instrument panel incorporated what the company called a "layered information meter" that allowed the driver to concentrate more on the road ahead than reading the various gauges in the cluster. The HSC never became the NSX successor because production for the NSX was halted in 2005.

The player can unlock this car by getting all gold medals in the Purple section (lessons #26 - #41) of the Driving School area.

This car can only be obtained by winning the Type R Meeting. This is only possible in the PAL and NTSC-J versions of the game.

As a Standard car, the Honda HSC "The 37th Tokyo Motor Show Concept Car" '03 can be purchased from the Used Car Dealership for 749,674 Credits. It is a Level 8 car. The HSC '03 may also be won from winning the Grand Valley 300km endurance race in A-Spec. 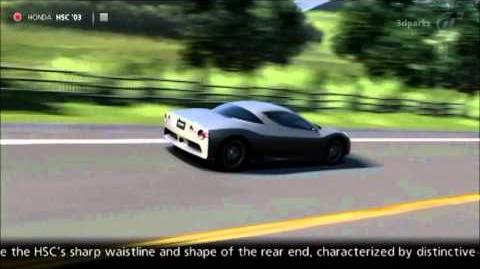 Retrieved from "https://gran-turismo.fandom.com/wiki/Honda_HSC_%22The_37th_Tokyo_Motor_Show_Concept_Car%22_%2703?oldid=152957"
Community content is available under CC-BY-SA unless otherwise noted.