The Honda S2000 '99 is a road car produced by Honda. It appears in every main Gran Turismo game to date since Gran Turismo 2. Although not initially available in Gran Turismo Sport, it was later introduced as part of Update 1.43, released on August 27, 2019.

The Honda S2000 was a revolutionary car. It symbolized the company's future direction in sports cars and possessed technology that trickled down from its deep association with motorsports. The S2000 was like a Formula 1 car for the road, from its high-revving engine to its engine-start button.

The S500, released in 1963, embodied Honda's philosophy of the engine and suspension working together harmoniously for maximum results and pleasure. Honda revived this philosophy for the modern age and instilled it into the S2000.

Every component of the car was purpose-built, including the super-rigid open monocoque "X-bone frame chassis". The engine was as race oriented as they came in a production car. The F20C, a 2.0-liter DOHC inline-4 featured an amazing 9000 rpm redline, with power rated at 246 HP. It also boasted excellent fuel economy. Mated to the engine was a sturdy whose throws were short and well-defined. In July 2000, the S2000 Type V was added to the lineup, featuring the VGS system that electrically controlled the steering ratio according to speed and turning angle. Aerodynamics and suspension were reworked in 2007, giving birth to the Type S with enhanced drivability on winding roads.

This car can be bought at the Honda New Cars Dealership in East City for 33,800 Credits. There are 2 racing modifications for this car, both costing 85,000 Credits. In addition to being available to purchase, this car is available from the start in Arcade Mode, where it's classified as a B-Class Car.

This car can be bought at the Honda dealership for 33,800 Credits. The special colored variants of this car can be obtained by winning the Amateur Type R Meeting.

The player can find and purchase this car in the Used Car Showroom (late '90s) for around 2,100,000 Credits. Note that the price could change depending on the car's mileage. It is only possible in the NTSC-J version of the game.

This car can be purchased for 33,800 Credits. It is a simplified car.

This car can be purchased in the Honda section of Brand Central for 34,000 Credits.

A Honda S2000 '99 with racing modifications applied. This is the first of the two racing schemes available. It comes in six color schemes: white, silver, black, red, yellow, and blue.

A Honda S2000 '99 with racing modifications applied. This is the second of the two racing schemes available. As mentioned before, this racing scheme bears a strong resemblance with the Spoon S2000 Race Car '00. 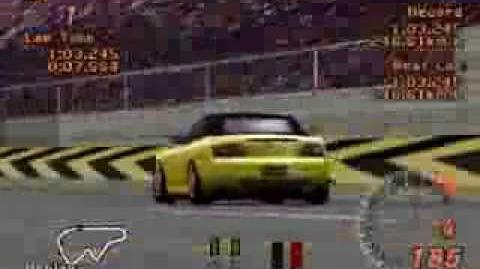 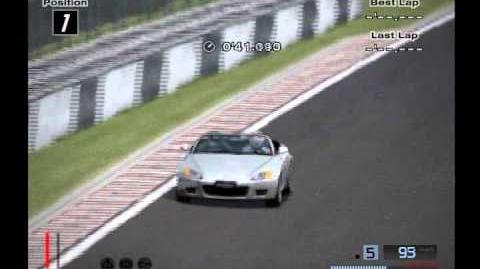 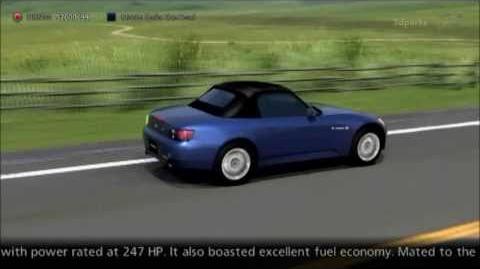 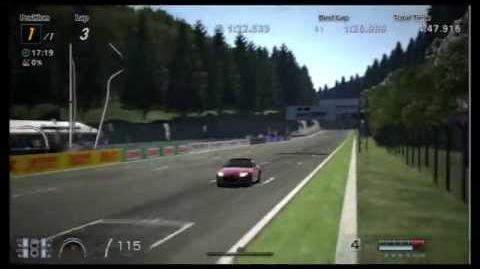 Retrieved from "https://gran-turismo.fandom.com/wiki/Honda_S2000_%2799?oldid=158082"
Community content is available under CC-BY-SA unless otherwise noted.