The Jaguar XJ220 LM Race Car is a race car produced by Jaguar. It appears in every main Gran Turismo game to date since Gran Turismo 2, with the exception of Gran Turismo Sport.

"Jaguar's road-going Group C car, which held the highest top-speed record for a production car in its day."

In 1988, Jaguar showed a prototype of a new exotic sports car at the Birmingham Motor Show. It was called the XJ220, and the car would see production a few years later, becoming one of the fastest machines on the planet. The "220" in its name was a reference to the car's claimed top speed of 220 mph (354 km/h).

The production of the XJ220 was the result of a joint venture with Jaguar Sports and TWR (Tom Walkinshaw Racing). TWR developed the Jaguar Group C race car, and was in charge of its racing team at the time.

Under the sleek hood of the prototype car was a naturally-aspirated V12, but the production model came powered by a twin-turbocharged 3.5-liter V6 that produced 542 BHP at 7000 rpm, making it more powerful than the twelve-cylinder. And because it was lighter, the car's handling saw dramatic improvements. The chassis was composed of an aluminum honeycomb and carbon Kevlar composite, which made the entire car very lightweight.

In 1993, Jaguar entered a race-prepped XJ220 in the GT-class of the 24 Hours of Le Mans. The driving duties were shared by David Coulthard, David Brabham, and John Nielsen. They took 1st in class. But a month later, the XJ220 was disqualified from that race due to an exhaust gas violation, and its victory was nullified.

This car can be obtained only by performing racing modifications on an ordinary Jaguar XJ220 GT Race Car for 85,000 Credits. The car is available in two color schemes, one being White and the other being Yellow. The livery of this car is also slighty different to the livery used in the later games of the series.

The XJ220 LM Race Car is not available in the dealership, but as a prize car. The player can acquire this car by completing the Gran Turismo World Championship in the Professional League. It has a chance of 1/4 (25% possibility) to come as a prize car.

The XJ220 LM Race Car can be acquired by winning the Pan Euro Championship at the European Events.

The vehicle banner as it appears in Gran Turismo 2, note that it is the same between this car and its road car equivalent. 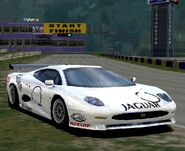 A race modified Jaguar XJ220 in Gran Turismo 2, which can be considered as an early incarnation of this car. 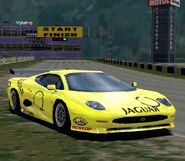 in the demo's of Gran turismo 2 The car had a sponsor reading Silverstone Insurance services, this was cut due to licensing issues 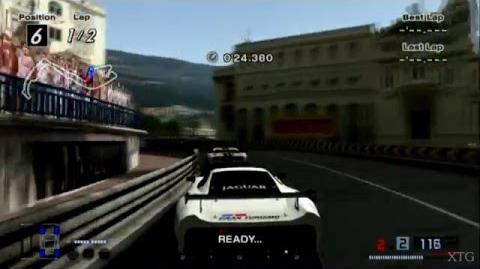 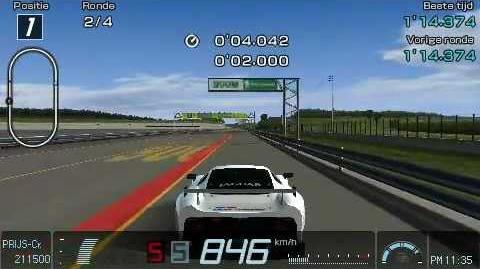