The car appears to be the #2, driven by Jan Lammers, Johnny Dumfries, and Andy Wallace, who finished the 1988 24 Hours of Le Mans in 1st place overall.

In the golden era of racing, Jaguar was a force to be sure, especially at the 24 Hours of Le Mans where the classic marquee won five times from 1951 to 1957. Not long after, the company disappeared from the Sarthe Circuit, not returning again until 1986 when the company unleashed its XJR-6, developed by TWR (Tom Walkinshaw Racing) in the Group C category.

The machine was designed by famed Formula 1 designer Tony Southgate and powered by a naturally-aspirated V-12. Group C at the time allowed any engine format as long as it met fuel-efficiency requirements. While most teams opted to use smaller-displacement engines with turbocharged power, Jaguar decided to stick with its naturally-aspirated 6.5-liter V-12. Subsequently, the engine grew to 7.0 liters, which resulted in around 690 HP, and placed into a new car called the XJR-9.

The XJR-9 faced off with powerhouses such as Nissan, Toyota, Mercedes-Benz, and Porsche at the 1988[1] 24 Hours of Le Mans. The XJR-9 charged forward from the start, with Jan Lammers, Johnny Dumfries, and Andy Wallace sharing the driving duties. At the end, it was the XJR-9 that took the checkered flag. It was a historic moment for Jaguar, who returned to glory at the famed French circuit after a long absence. It also marked the first time a normally-aspirated powerplant outduelled a field made up of turbocharged engines.

This car can be purchased at the Jaguar Legendary Cars Dealership for 3,500,000 Credits. It can also be obtained by completing at least 50% Game Completion in Gran Turismo Mode. All of this is only possible in the international versions of the game.

As a Standard car, the Jaguar XJR-9 LM Race Car '88 can be purchased from the Used Car Dealership for 4,687,490 Credits. A Premium version of this car was also available in the Spec 2.0 DLC Car Pack 3, previously downloadable for $5.99, now no longer available. Further copies of the Premium version can be purchased from the dealership for 4,750,000 Credits. Both cars are Level 23.

This car can be purchased in the Jaguar section of Brand Central for 1,000,000 Credits.

This car can occasionally be purchased from the Legend Car Dealership for 2,500,000 Credits.

The vehicle banner as it appears in Gran Turismo 4. 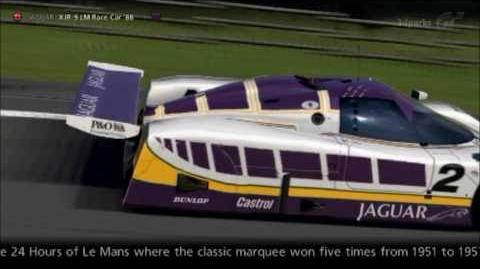