The Lancia DELTA HF Integrale Rally Car '92 is a 1992 WRC race car produced by Lancia. It first appears in Gran Turismo 2, and has returned in every main game since, with the exception of Gran Turismo Sport.

The car appears to be the #4 driven by Didier Auriol at the 1992 Monte Carlo Rally, who ended up finishing 1st in the rally and 3rd overall in the Driver's Championship of the 1992 WRC season, but won the Manufacturer's Championship for Martini Racing.

"Won the WRC Manufacturer's Championship title 6 years in a row."

After Group B racing was dropped from the WRC in 1986, Lancia chose the Delta as their Group A machine. Converted to all-wheel drive and sporting a turbocharger, this high-performance was dubbed the HF4WD and entered the 1987 WRC. The following year, the Delta HF4WD was equipped with blister fenders and evolved into the Integrale. In 1990, the Integrale's engine was given a 16-valve head, increasing its power. However, the Toyota Celica was considerably quicker, and the Delta was the Driver's Championship snatched from its grasp by the Celica in 1990 and again in 1991. Thus, in 1992 Lancia released what would be called the final evolution of the Delta.

The new Integrale had better handling through body reinforcement and extensive revisions to the suspension. A spoiler was attached to the end of the roof to increase downforce. The torque split of the all-wheel-drive system was biased toward the rear wheels, making the car feel more like a rear-wheel-drive machine.

The Delta regained its competitive strength, and after joining forces with the Jolly Club team, drivers Juha Kankkunen and Didier Auriol participated in 11 of the 14 rounds in the series, with Auriol taking six wins, Kankkunen winning once, and Andrea Aghini also winning once, for a total of eight wins, giving Lancia the Constructor's Championship for the sixth consecutive year.

By performing racing modifications on an ordinary Lancia DELTA HF Integrale Evoluzione '91 for 85,000 Credits, the player can get this car. In addition, this car is available from the start in the Rally Section of Arcade Mode.

This car can be bought at the Lancia dealership for 500,000 Credits. In can also be won by winning the Passage to Colosseo Endurance race where it has a 25% chance of being won.

The player can unlock this car by completing the lesson #41 in the Driving School area.

This car cannot be bought at the Lancia Dealership as it is not for sale. It can only be obtained by winning the Umbria Rally on Medium. Aside from that, this car is available from the start in Arcade Mode.

As a Standard car, the Lancia DELTA HF Integrale Rally Car '92 can be purchased from the Used Car Dealership for 738,614 Credits. It is a Level 10 car. 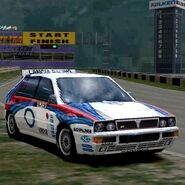 The Lancia DELTA HF Integrale Rally Car '92 as it appears in Gran Turismo 2. It lacks the driver number, as well as the censored Martini logos. It also has a different front bumper.

The rear of the Lancia DELTA HF Integrale Rally Car '92 in Gran Turismo 3: A-Spec. It originally had a clearly readable license plate, reading TO 45703S. This text is also present in Gran Turismo 4 Prologue. Also, the rims of the car are slightly bigger compared to its appearance in later games.

The rear of the Lancia DELTA HF Integrale Rally Car '92 in Gran Turismo 4. Starting from this game, the license plate was rendered illegible.

Retrieved from "https://gran-turismo.fandom.com/wiki/Lancia_DELTA_HF_Integrale_Rally_Car_%2792?oldid=136060"
Community content is available under CC-BY-SA unless otherwise noted.