The Lancia STRATOS '73 is a road car produced by Lancia. It appears in every main Gran Turismo game to date since Gran Turismo 2, with the exception of Gran Turismo 3: A-Spec. Although not initially available in Gran Turismo Sport, it was later introduced as part of Update 1.36, released on March 28, 2019.

"Only the chosen can experience its ultimate driving flavor. The legendary machine that is the icon of Lancia."

At the 1970 Torino Motor Show, Bertone exhibited one design study. This prototype (designed by Marcello Gandini) grabbed the attention of Lancia who were looking for a successor to the Fulvia rally machine. In 1972 it finally debuted in the world as a rally special. This car was the Lancia Stratos.

The wheelbase and tread tells everything about the Stratos's race-bred lineage. At 85.8 inches the wheelbase was considerably shorter than the lightweight Japanese K-cars of today. Nevertheless it had a rear tread of 57.3 inches, close to that of the Skyline GT-R. In other words, the Stratos was a car that combined the pinnacle of steering sharpness with an unforgiving chassis.

The body is a strong, steel plate welded monocoque frame to which are affixed FRP exterior panels. In order to facilitate easy maintenance at the scene of a rally, the front and rear body cowls can be completely removed.

The engine is mounted behind the seats and is the same 2.4L DOHC V6 engine as in the Ferrari Dino 246GT. Its maximum power output of 185 BHP and maximum torque of 23.0 kgf.m were capable of propelling the roughly 980kg vehicle to 140 mph.

It won its first official competition debut in the 1974 San Remo WRC. Thereafter, it proved to be a very competitive car and the Stratos brought about three consecutive constructor's championships for Lancia from 1974 to 1976.

For the purpose of homologation, 500 Stratos were produced through 1978, and an original Stratos is still a valuable car for collectors.

This car is also available in Arcade Mode in the Rally Car class, with upgrades equipped. In order to unlock it, the player must win a race in Arcade Mode on Grand Valley East at normal level or higher.

This car can be purchased for 133,970 Credits in the Lancia Dealership.

As a Standard car, the Lancia STRATOS '73 can either be purchased from the Used Car Dealership for 263,296 Credits or be won from the Gallardo Trophy with all gold medals in B-Spec. It is a Level 2 car.

This car can be purchased for 375,000 Credits. It now has a detailed interior.

This car can be purchased in the Lancia section of Brand Central for 600,000 Credits. 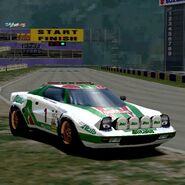 The 15th Anniversary Edition of the Lancia STRATOS '73 as it appears in Gran Turismo 6.

Lancia Stratos '73 in Gran Turismo 3: A-Spec, which can be only obtained by cheat devices
Add a photo to this gallery

Retrieved from "https://gran-turismo.fandom.com/wiki/Lancia_STRATOS_%2773?oldid=155095"
Community content is available under CC-BY-SA unless otherwise noted.