The Lexus GS 400 is a road car produced by Lexus, but is listed as a Toyota vehicle in its only appearance in Gran Turismo 2, where it was replaced by the Lexus GS 300 in later games.

The second-generation GS sedan announced Lexus as a serious player in the sports sedan field. The GS 300 and GS 400 use a rigid chassis with a front-engine, rear-wheel drive powertrain layout. The four-wheel independent double wishbone suspension is tuned for handling as well as comfort. Both the GS 300's 225 horsepower, 3.0-liter inline six and the GS 400's 4.0-liter, 300 horsepower V8 are four-valve-per-cylinder dual overhead cam designs. They use the Lexus's VVT-i electronically-controlled continuosly-variable system for the best performance under all conditions, and at all engine speeds. A five-speed electronically-controlled automatic transmission is found in both the GS 300 and GS 400; the GS 400 has steering-wheel-mounted "E-Shift" controls inspired by those in Formula 1 race cars. Standard equipment in the two GS models includes the "VSC" vehicle skid control system, which uses sophisticated electronic systems to monitor the car's intended direction and compare it to the actual direction. If understeer or oversteer are detected, hardware and software of the antilock braking and traction control systems intervene to bring the car back in line.

This car can be bought at the Toyota New Cars Dealership for 39,740 Credits. 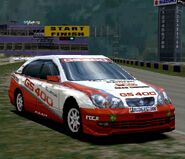 Retrieved from "https://gran-turismo.fandom.com/wiki/Lexus_GS_400?oldid=136078"
Community content is available under CC-BY-SA unless otherwise noted.