The Lotus Elise GT1 is a road car produced by Lotus. It only appears in Gran Turismo 2.

There is only one color available for this vehicle, it is unnamed in-game:

There have been three competition versions of the Lotus Elise. All have modifications for lighter weight, increased safety - full roll cages are specified - and even better handling than the stock Elise. The first was the Elise GT1. A carbon-fiber body covered a version of the Elise bonded-aluminium backbone chassis modified to take a 3.5 liter twin-turbo Lotus Esprit V8 Engine. In street tune, it had the same 350 BHP as the Esprit; in race tune "over 550 hp" was available in a car weighing under 2.000 lbs. The suspension was to full competition specification, and 14-inch disc brakes with 6-piston calipers provided immense stopping power. The Sport Elise 190, offered from 1997, was intended for circuit use only, with increased power: 190 BHP at 7.000 rpm, with 140 lb/ft of torque at 5.650 from the Elise four-cylinder engine and a suspension calibrated for track use. With weight under 1.500 lbs, the track-ready car could do 0-62 mph in a supercar-like 4.4 seconds. The Motorsport Elise of 1999 takes the concept of the Sport Elise 190 a step further. Designed for a one-make racing series run by the factory at various European venues, the Motorsport Elise features redesigned bodywork with an aerodynamic hardtop, competition suspension, and a race-spec 200 BHP version of the Elise four-cylinder engine. Like the Sport 190, is meant for competition use only, with no street version available.

This car can be purchased in the special section of the Lotus dealership for 1,000,000 Credits. 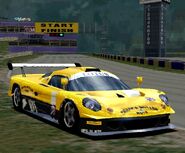 Retrieved from "https://gran-turismo.fandom.com/wiki/Lotus_Elise_GT1?oldid=152007"
Community content is available under CC-BY-SA unless otherwise noted.