The LRV is propelled by in-wheel motors powered by silver-zinc battery. Four-wheel drive and a four-wheel steering system allowed both front and rear wheels to turn and steer independently. The tires are metal wire mesh, with herring-bone-shaped aluminum plates wrapped around the tread surface for traction. The crew members would settle into the car, then operate the car using a T-shaped controller. The image of the LRV driving on the moon's surface has been recorded on historic film footage. 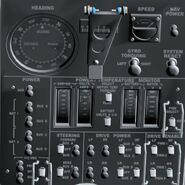 Retrieved from "https://gran-turismo.fandom.com/wiki/Lunar_Roving_Vehicle_LRV-001_%2771?oldid=130308"
Community content is available under CC-BY-SA unless otherwise noted.