Five colors are available for this car in Gran Turismo 3: A-Spec:

Eight colors are available for this car in Gran Turismo 4 and onwards:

"This Gran Turismo original was created for fans of rotary-engine race cars."

The RX-7 is the definitive symbol of Mazda sportscars, and though production has ended on the sorely-missed FD3S model, there are many who eagerly await its return. Its level of performance as a sports car is top-level even today.

The body of the RX-7 is stretched wide as if to hug the ground. In order to accommodate its wide wheeltrack and wide tires. Despite this, its weight is only around 1.1 tons, due to significant efforts to reduce weight, making the hood, suspension and even the spare wheel, jack, and other components out of aluminium. In design, it has been given an unique organic form, giving it a feel that is offered by no other.

This LM Edition is a racing car based on the FD series RX-7, appearing in Gran Turismo. A heavily modified 3-rotor 20B turbo from the Eunos Cosmo replaces the familiar two-rotor 13B turbo engine. Though its displacement is only around 2L with three rotors of 654cc per rotor, it produces 493 BHP at 7000 rpm. Furthermore, drivability and usable power has been improved via the use of sequential twin-turbos.

The fenders of the car has been made wider to fit racing tires, and is given a front bumper spoiler with built in foglights, non-retractable headlights, side canard fins, a ventilated hood, rear wing and roll cage. Even with all this, the car barely exceeds 1 ton, demonstrating the dramatic level of weight reduction.

This 3-rotor racing version of the FD series RX-7, is a rotary enthusiast's dream come true.

This car can be won by winning the Dream Car Championship, or the Tokyo R246 Endurance. In both events, it has a chance of 1/4 (25% of probability) to come as a prize car.

This car can only be obtained by winning the Roadster 4hr Endurance.

As a Standard car, the Mazda RX-7 LM Race Car can be purchased from the Used Car Dealership for 984,471 Credits. It is a Level 19 car.

This car can be purchased from the Mazda dealership for 1,000,000 Credits. It has a simple interior.

The Mazda RX-7 LM Race Car as it appears in Gran Turismo 3: A-Spec. Compared to its appearance in the later games, the car has many different decals, such as the "Gran Turismo" logos being colored with a single color (black or white, depending on the car's color scheme), and the "Mazda" logo on the windshield instead of the "Mazda RX-7" logo seen in the later games.

The Mazda RX-7 LM Race Car as it appears in Gran Turismo 4. Unlike in GT3, the car has a new body and the "Gran Turismo" logos on the sides were changed to "Gran Turismo 4" logos.

The Mazda RX-7 LM Race Car as it appears in Gran Turismo PSP. The "Magneti Marelli" logo on the side skirt was replaced with two Japanese symbols. Apart from this minor change, the car remained the same as in GT4. 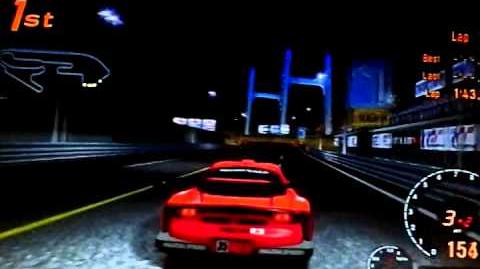 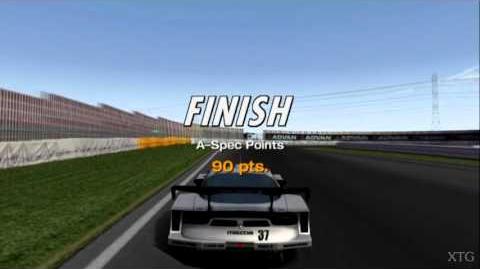 Retrieved from "https://gran-turismo.fandom.com/wiki/Mazda_RX-7_LM_Race_Car?oldid=136304"
Community content is available under CC-BY-SA unless otherwise noted.