The player can choose five colors for this car:

"The 10th Lancer Evolution evolved into a premium sportscar after leaving rally racing."

The 4th generation platform Lancer Evolution was first announced at the 2005 Tokyo Motor Show as the "Concept-X"[1] concept car. Changing direction from the factory tuning car character of its past, it now targeted a premium sports market like the BMW M series and Audi S series.

The major difference from the 3 generations and a total of 12 types of Lancer Evolutions in the past, is the change of engine from the 4G63 to the new generation 4B11. Its all aluminum construction and rearward exhaust make it difficult to turn into a high powered turbo, but engineers at Mitsubishi have overcome this challenge.

The transmission is offered in a TC-SST 6-speed DCT in addition to the standard 5-speed MT. It is possible to shift quickly using paddles behind the steering wheel. the base transmission was developed by Getrag, and was tuned carefully for endurance and stable performance.

The 4WD system has evolved into the S-AWC (Super All-Wheel Control) system, and it integrates the ACD (Active Center Differential) and Super AYC (Active Yaw Control), and even combines the ABS controls. With the addition of the ABS control, an even more effective control of drive force distribution has become possible. The ACD+Super AYC controls have been improved to be simpler, and a linear control characteristic has been achieved. Because of its emphasis for the "Premium" market, the quality of the interior, the ride quality and noise levels are much improved from previous models, and the controls that were heavy in the past have been brought to almost standard levels. The top grade GSR premium has a chrome plated front grill, along with BBS wheels and Recaro seats standard equipment.

This car can be purchased at the Mitsubishi dealership for 42,400 Credits.

As a Premium car, the Mitsubishi Lancer Evolution X GSR Premium Package '07 can be purchased from the Dealerships for 42,400 Credits. It is a Level 7 car.

This car can be purchased for 42,400 Credits. It is a detailed car. 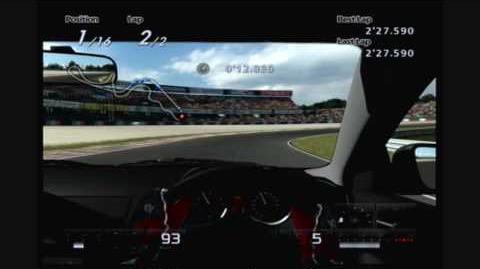 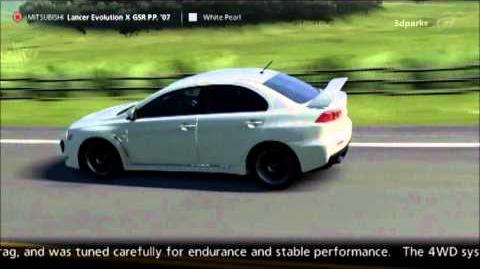 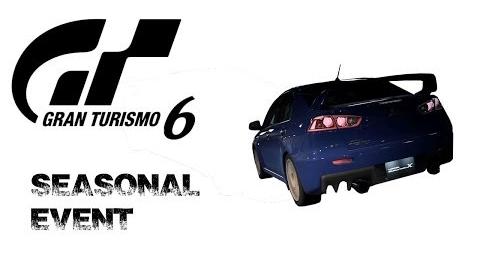