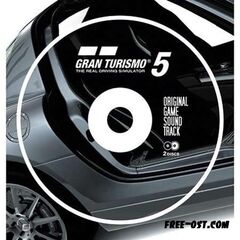 The soundtrack of Gran Turismo 5 boasts an impressive 189 music tracks for use in various parts of the game. Many of these are popular rock songs from current artists, while a number of relaxed classical tracks are included for use in the menus. On starting the game, the intro movie is overlayed with Lang Lang's rendition of Piano Sonata No. 7 (Prokofiev) Third Movement. This is followed by a gameplay movie over which either Planetary (Go!) by My Chemical Romance (prior to Spec 2.0) or 5oul on D!splay" by Daiki Kasho (after Spec 2.0) is played.

The official theme music, which was used for all official trailers of the game, is entitled "5oul on D!splay". The naming of this track was opened to the public and, of the hundreds of entries, the title chosen by MajanoX was selected.