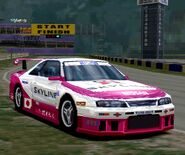 The NISMO GT-R LM Race Car '95 as a race modified version of the NISMO GT-R LM Road Going Version '95 in Gran Turismo 2. Aside from having Yokohama Super Advan Racing Ver.2 rims by default, the car remained the same as in the original Gran Turismo.
Add a photo to this gallery

Retrieved from "https://gran-turismo.fandom.com/wiki/NISMO_GT-R_LM_Race_Car_%2795?oldid=155086"
Community content is available under CC-BY-SA unless otherwise noted.