New York Circuit is a street circuit which appears in Gran Turismo 4 Prologue, Gran Turismo 4, Tourist Trophy and Gran Turismo PSP. It is set in New York City, NY, USA, particularly in Times Square, Manhattan, and runs along 7th Avenue and Broadway, incorporating 56th, 57th, 58th and 59th Streets crossing with 5th and 6th Avenues. It has a very high speed 1.4 km straight running along Broadway and a series of 90 degree turns that lead to Central Park.

This circuit also serves as the location for the 11th Driving Mission of Gran Turismo 4.

The circuit appears in the following events in Gran Turismo 4:

Accelerate down Broadway towards Times Square where turns 1 and 2 are located. They are two 90-degree left hand turns that turn onto 7th Avenue but are treated as the one. As the approach speed will be high, you will need to brake effectively in order to slow down for the turns. Start braking before the 100m marker sign overhead, and turn in while controlling partial throttle. Aim to clip the apex's of both corners, but avoid the kerbing on the inside as it can upset the cars balance. Pick up the throttle once you have exited turn 2 and accelerate down 7th Avenue.

Take the turn 3 and 4 chicane flat out, aiming to cut between the inner walls in a straight line.

This part of the track is a series of 90-degree corners, which are typical of city circuits, that weaves along the streets of New York. The approach speed will be quite high for turn 5, so brake in a straight line from before the 100m marker sign. Turn off 7th Avenue and onto West 55th Street, being careful not to collide with the outside wall as you begin to accelerate.

Turns 6 and 7 form a sequence of blind corners that turn on and then off of 6th Avenue. This is a sequence that goes from a wide road to a narrow street back onto a wide road, and it is best treated like an S-bend. Brake sufficiently before entering, and then trace an out-in-out line through both turn 6 and turn 7, braking briefly along 6th Avenue to control speed.

Turns 8 through 11 are a series of complex 90-degree corners that lead from West 57th Street onto West 59th Street, just on the outskirts of Central Park. This sequence can be difficult to get a good rhythm for, but it is best taken all as one set or corners rather than multiple individual corners one after the other. Be careful of the kerbstones on the inside of turn 9, as running over them can upset the balance of the car. Practice this section until you find a line that you find best.

Turns 12 to 14 turn around the Columbus Circle, forming a long sweeping corner that turns onto Broadway. Brake before the 100m marker sign, navigate around turn 12 and control your throttle and steering as you navigate turn 13. While it can be tempting to pick up the throttle early for turn 14, doing so will cause the car to understeer and send it wide into the wall. Pick up the accelerator as you pass the apex point, and power down Broadway towards the control line to complete the lap.

The circuit's long straight can be used as a good overtaking point if your car has excellent aerodynamics. Draft your opponent and go alongside them once you've accelerated quicker than the opponent. The first hairpin can also be used as a good overtaking point. All you have to do is brake slightly earlier than your opponent, than accelerate through it. By braking earlier, you should avoid a risk of severe understeer. To further dominate the circuit, your car's handling and speed should be well-balanced, in order to take the tight corners with ease and storm through the straightaways. If you drive a race car or a car upgraded with fully customizable transmission, adjust the ratio so your doesn't bog down at the tight sections but still retain its top-end speed. 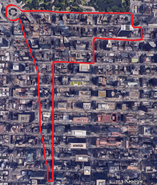 The circuit imprinted onto a real life map
Add a photo to this gallery
Retrieved from "https://gran-turismo.fandom.com/wiki/New_York?oldid=146798"
Community content is available under CC-BY-SA unless otherwise noted.