The Nissan 180SX Type X '96 is a road car produced by Nissan. It appears in every main Gran Turismo game to date. Although not initially available in Gran Turismo Sport, it was later introduced as part of Update 1.56, released on February 27, 2020.

Five colors are available for this car: 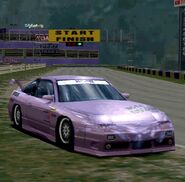