The Nissan SILEIGHTY '98 is a Road car produced by Nissan. It appears in every main Gran Turismo game to date, except Gran Turismo 3: A-Spec and Gran Turismo Sport.

"The 180SX and Silvia in one. An original car born from the love of fans."

The SILEIGHTY can be obtained by completing the FR Challenge in Special Events. It has a 1/2 chance (50% probability) to come as a prize car.

The SILEIGHTY can be obtained by winning the first race of the FR Challenge, located on Clubman Stage Route 5. The car is ineligible for the Silvia and 180SX Club one-make race, as it was not coded to be eligible.

The SILEIGHTY '98 can occasionally be purchased in the Late 90's Car Showroom for around 12,000 Credits. It can also be obtained as a prize car from winning the Silvia Sisters event. This car can be used in Arcade Mode, but it doesn't appear with the other Nissan cars. It can instead be selected for use through the '98 era's car list.

From this game onwards, the car is based on Kids Heart's official Sileighty model that were sold by Nissan in limited quantities in 1998, hence the model year.

As a Standard car, the Nissan SILEIGHTY '98 can be purchased from the Used Car Dealership for 18,501 Credits. It is a Level 2 car. It can also be won from the A-Spec Japanese 90's Challenge event in the Amateur Series.

This car can be purchased for 22,880 Credits. It is a simplified car. 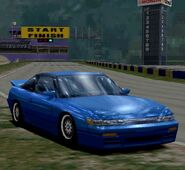 The Nissan Sileighty as it appears in the original Gran Turismo and Gran Turismo 2. It appears to be based on the pre-facelift model as opposed to the post-facelift one depicted in later games. It also appears to be based on the Impact Blue Sileighty appearing in the anime and manga Initial D due to the silver BBS wheels and whale tail rear spoiler.

Retrieved from "https://gran-turismo.fandom.com/wiki/Nissan_SILEIGHTY_%2798?oldid=152173"
Community content is available under CC-BY-SA unless otherwise noted.