The Nissan SKYLINE GTS-R (R31) '87 is a Road car produced by Nissan. It first appears in Gran Turismo 2, and has returned in every main game since, except for Gran Turismo 3: A-Spec and Gran Turismo Sport.

Originally, four colors were available for this car, however, with the release of Gran Turismo 4, Blue Black is now the only color remaining:

While the previous generation (R30) Skyline model took this wildly-popular Japanese sports car icon to a whole new level in terms of performance and respect, the seventh generation version (R31) lost a bit of its "street cred" when it first appeared in 1985 as a 4-door sedan and, *gasp*, a wagon. But true-blue Skyline loyalists were relieved when the 2-door coupe model made its debut in May 1986.

But the most potent of all Skylines (not including the GT-R of course) didn't show up until August of 1987. It was the GTS-R, limited to only 800 cars in total. Developed to reclaim the Group A title, the GTS-R was a very sporty model, hence its immense popularity.

Starting with the RB20DET turbocharged inline-6 of the GTS, the GTS-R received a more potent T04E turbocharger and a stainless steel exhaust manifold, this duo boosting power output to 207 HP and torque to 180.8 ft-lb. This engine was so special it ended up getting its own designation, the RB20DET-R. The exterior and suspension were also improved.

The GTS-R excelled in Group A, with the Reebok-sponsored Skyline crowned champion for the 1989 season. But the car's name triggered controversy among fans, who wondered why not just call it a GT-R. The answer would not be revealed for another two years with the debut of the R32 model.

This car can occasionally be bought at the Nissan Used Cars Dealership for around 12,000 Credits.

This car can occasionally be bought at the 1980's Used Cars Dealership for around 11,899 Credits, depending on the mileage.

This car can be purchased for 34,000 Credits. It is a simplified car. 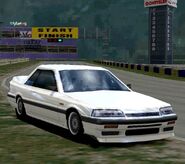 The Nissan SKYLINE GTS-R (R31) '87 as it appears in Gran Turismo 2. In this picture is displayed the White color option, only available in that game.

A Nissan SKYLINE GTS-R (R31) '87 with racing modifications applied. Although the car doesn't show a driver number, it clearly appears to be the #12, driven by Kazuyoshi Hoshino and Moto Kitano during the 1989 JTCC season.
Add a photo to this gallery

Retrieved from "https://gran-turismo.fandom.com/wiki/Nissan_SKYLINE_GTS-R_(R31)_%2787?oldid=142065"
Community content is available under CC-BY-SA unless otherwise noted.