The Peugeot 106 1.6 Rallye is a Road car produced by Peugeot. It only appears in Gran Turismo 2, being replaced by the Peugeot 106 Rallye '03 in the later games of the series.

There is only one color available for this vehicle:

The evocatively named Peugeot 106 Rallye first burst onto the scene in 1994 powered by a 1.3 litre 100 BHP engine - enough power to get the budget hot hatch from 0-60 mph in 9.3 seconds. Nevertheless, it wasn't until 1997 that the Rallye truly got the power its name deserved. Designed with the fun of driving in mind rather than luxury and comfort, the Rallye quickly gained cult status among the motoring press - some even labelling it as the Mini Cooper for the 90's. From the outside the Rallye is immediately distinguishable thanks to its special Indigo Blue or Bianca White paint job and Rallye splash decals. It also gets chunky, 14 inch white steel wheels along with 175/60 R14 tyres to give it even more grip under extreme cornering. Powered by a 1.6 litre engine mated to a five speed gearbox, the current Rallye musters 103 BHP and 97 lb/ft of torque at 3,500 rpm. It's good enough to give the car a 0-60 mph time of just under nine seconds and a top speed of 121 mph. As you'd expect, the Rallye gains a number of performance aids, most notably disc brakes all round (ventilated at the front) as well as beefier anti roll bars on the pseudo MacPherson struts and wishbone suspension. The rear utilises a suspended arm assembly with torsion bars. To further aid performance by reducing the weight of the car, sound deadening has been kept to a minimum. As well as being one of the most fun hot hatches available on the road today, the Rallye is homologated for international Group N and Group A competition. As a result Peugeot also produce a number of competition parts for the car should the owner wish to use it in competition.

This car can be bought at the Peugeot dealership in West City for 19,230 Credits. 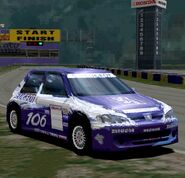 Retrieved from "https://gran-turismo.fandom.com/wiki/Peugeot_106_1.6_Rallye?oldid=136836"
Community content is available under CC-BY-SA unless otherwise noted.