The Peugeot 106 S16 is a tiny giant killer. Launched in the majority of European markets in 1996, the model was rebadged as the 106 GTI for its introduction to the UK a year later. Instantly, the petite French hot hatchback gained a reputation as a car that could be driven quickly with great confidence over even the most challenging roads. The 106 S16 instantly gains an advantage over heftier sports cars thanks to its overall compactness. But there's more to its talents. Underneath that small body lurks all-independent suspension combining MacPherson struts at the front end and trailing arms at the rear. Adding to the S16's abilities through the twists is a suspension set-up that, whilst being lowered, still retains springs rates carefully designed to retain suppleness over bumpy European backroads. There's no shortage of grip, either, thanks to 185/55 low-profile tyres worn by compact 14-inch alloy wheels. Although there's no traction control to tame the S16's power delivery through its front wheels, at least power-assistance is provided for the responsive steering. Braking, meanwhile, is coped with by ventilated front discs and solid rears matched to an anti-lock system. Further guaranteeing the 106 S16's status as a proper little pocket rocket is a raucous 1.6-litre 16-valve four-cylinder powerplant serving up a healthy 120 BHP at 6,600 rpm. Torque isn't lacking either, with 108 lb/ft produced at 5,200 rpm. This is all delivered via a five-speed manual gearbox. Even in a straight line the S16 is a respectably rapid piece of kit, seeing off the nought to sixty-two mph acceleration blat in 8.7 seconds. The surprising supplies of surge on offer don't end until 127 mph. All of which combines to ensure that, over the right road, the little 106 S16 can fend off exotics[1] with twice the top speed and ten times the asking price.

This car can be bought at the Peugeot dealership in West City for 23,500 Credits. 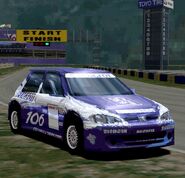 Retrieved from "https://gran-turismo.fandom.com/wiki/Peugeot_106_1.6_S16?oldid=136837"
Community content is available under CC-BY-SA unless otherwise noted.