The Peugeot 206 S16 '99 is a Road car produced by Peugeot. It first appears in Gran Turismo 2, and has returned in every main game since, with the exception of Gran Turismo Sport.

There are fourteen colors to choose from for this car:

"A quick model with tighter suspension that breaks the soft image of the 206."

In September 1998, the Peugeot 206 debuted at the Paris Salon as the successor to Peugeot's best selling-vehicle, the 205. Peugeot produced many variations of their next generation high volume seller with the S16 hot hatch at the top of the list. Other vehicles included the 4-seater coupe cabriolet CC, the wagon model SW, and the next generation sports car, the RC.

The S16 hot hatch looks like a normal 206, but the very slightly enlarged fenders allow for wider tires. The power unit is a 2.0L DOHC inline-4, producing 138 BHP @ 5800 rpm, and a maximum torque of 135.2 lb-ft @ 4000 rpm; this is combined with a 6-speed MT. The suspension and chassis were tuned for sports and the car possessed exciting handling characteristics, quite the opposite of its soft image.

The main feature of the CC, the 4-seater coupe cabriolet, is its retractable metal hard top which allowed the car to be enjoyed as either a coupe of a cabriolet with the touch of a button. In 2002, it received the same 2.0L engine as the S16, allowing for the same high maneuverability to be enjoyed in the open air.

The SW was a full featured model that allowed you to enjoy the style of the 206 and still have the cargo capacity of a wagon. Choosing the optional 2.0L engine provided the same satisfying sporty feeling of the S16.

This car can be bought at the Peugeot dealership in West City for 24,460 Credits. In addition, this car is available from the start in Arcade Mode, where is classified as a C-Class car.

This car can be bought at the Peugeot dealership for 23,360 Credits.

This car can be occasionally found in the Used Car Showroom (Late '90s) and it can be purchased for around 15,000 Credits. The exact price of the car may vary depending on the mileage.

This car can be purchased for 23,070 Credits. It is a simplified car. 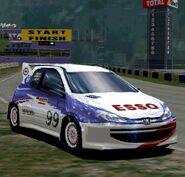 A Peugeot 206 S16 '99 with racing modifications applied in the NTSC-J and PAL versions of Gran Turismo 2. It appears to be the game's representation of the die-cast Peugeot 206 WRC #99. 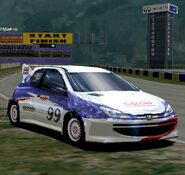 A Peugeot 206 S16 '99 with racing modifications applied in the NTSC version of Gran Turismo 2. Due to the non-existence of Esso in the United States, all references to Esso are changed to Exxon in this version.

Retrieved from "https://gran-turismo.fandom.com/wiki/Peugeot_206_S16_%2799?oldid=150808"
Community content is available under CC-BY-SA unless otherwise noted.