The Peugeot 406 Sedan is a Road car produced by Peugeot. It so far appeared only in Gran Turismo 2, before being overshadowed by its coupe equivalent.

There are four colors available for this vehicle:

Peugeot's sleek 406 was first unveiled in 1995, replacing the staid-looking but fine-driving 405. Available initially only as a four-door saloon, the 406 quickly made its mark thanks to a combination of a superbly relaxed ride with eager road handling. By the time it was revised in 1999 it had become one of Europe's best-selling saloons. For its highly acclaimed suspension the front-wheel-drive 406 uses pseudo MacPherson struts up front coupled with a multi-link rear end and is set up with a bias toward comfort but without forgetting that there's a driver behind the wheel. So although the suspension is quite softly sprung and in hard cornering the 406 is prone to a fair degree of body roll, there is ample grip and plentiful steering feedback so it can still be enjoyably and safely hoofed around. Stopping power comes from all round discs with ABS anti-lock. Boasting a spacious and well-equipped interior, the 406 is also a highly accomplished long-distance cruiser, especially in 24-valve V6 guise. This lusty three-litre engine produces 194 BHP at 5,500 rpm and is good for over 140 mph and 0-60 mph acceleration of around eight seconds - all accompanied by the intoxicating thrum of six pistons pounding at high revs. A five-speed manual gearbox is standard but a four-speed intelligent automatic with sport or winter modes can also be specified for those who wish to enjoy an even more relaxed ride. A wide range of four-cylinder petrol and diesel engines is also available to 406 buyers whose budget won't stretch to this highly-accomplished range-topper. Shortly after the introduction of the 406 saloon the line up was broadened to include a stunning Coupe and a practical Estate model together with a competitive Touring Car which raced throughout Europe.

This car can be purchased at the Peugeot Dealership for 44,390 Credits. 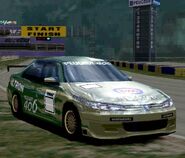 A Peugeot 406 Sedan with racing modifications applied. (PAL and NTSC-J versions of the game). The race modified version of this car appears to be the car used by Tim Harvey and Paul Radisich during the 1998 BTCC Season, who achieved 17th place overall with Harvey, and 14th place overall with Radisich. 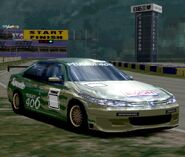 A Peugeot 406 Sedan with racing modifications applied. (NTSC version of the game). Due to the non-existence of Esso in the United States, all the references to Esso Ultron are changed to Exxon Superflo.

Retrieved from "https://gran-turismo.fandom.com/wiki/Peugeot_406_Sedan?oldid=136857"
Community content is available under CC-BY-SA unless otherwise noted.