The Renault Sport Clio V6 24V '00 is a road car produced by Renault. It appears in every main Gran Turismo game to date since Gran Turismo 2. Although not initially available in Gran Turismo Sport, it was later introduced as part of Update 1.40, released on June 27, 2019.

In Gran Turismo 2, only one color is available available for this car. It is unnamed in the game:

"An extreme midship car with a 3 liter engine, developed by TWR."

Renault wanted to build the ultimate hot hatch from the second-generation Clio. To do so, the company decided to install a 3.0-liter, DOHC V6, in a midship arrangement, into the family hatchback, since there wasn't enough room to accommodate such a large powerplant under the hood.

This engine is the same found in the company's upscale model, the Laguna. It produces 230 HP at 6000 rpm, and an impressive 221.3 lb-ft of torque at 3750 rpm. Shifting is performed via a slick 6-speed manual gearbox. The large power output made the Clio Renault Sport V6 the prototypical "point and squirt" car because it possessed both excellent acceleration, especially at the low end of the rpm spectrum, and remarkable nimbleness.

The suspension system consisted of specially designed struts, and when combined with the grip provided by its wide tires - 205/50R17 up front and 235/45R17 at rear - the little Renault stuck to the road surface through corners. The transformation from little family hatch into a mid-engined sports car was amazing.

A slightly redesigned Sport V6, called "Phase II", appeared at the Paris Motor Show in October 2002. Power for the engine was bumped up to 251 HP at 7150 rpm and 221.3 lb-ft of torque. The suspension geometry was also revised, and, when combined with an additional subframe at the rear, the car handled better than the original. It also featured larger 18-inch wheels, and a more aggressive front fascia.

This car can be bought at the Renault dealership in West City for 52,440 Credits. Aside from being purchasable from said dealership, this car is also available in Arcade Mode as an unlockable S-Class car after the player wins a race in High Speed Ring at Normal or Difficult level. In this game, the car is referred to as the Renault Clio Sport V6 24V.

This car can be bought at the Renault dealership for 43,400 Credits.

This car can be bought at the Used Car Showroom (Late '90s) for around 32,800 Credits. The exact price of the car may vary depending on the mileage. It is only available in the international versions of the game.

This car can be purchased at the Renault dealership for 45,500 Credits.

Unlike its Lutecia counterpart, the Clio Renault Sport V6 24V '00 is a Premium Car and can be purchased from the Dealerships for 45,500 Credits as Level 3 car. A Standard version of this car can be imported from Gran Turismo PSP, but its use is limited to Arcade Mode only.

This car can be purchased for 45,500 Credits. It has a detailed interior.

This car can be purchased in the Renault Sport section of Brand Central for 70,000 Credits. 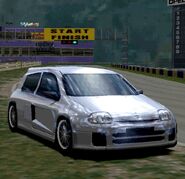 The Clio Renault Sport V6 24V as it appears in Gran Turismo 2. Based on the 1998 concept version, it lacks a front license plate, fog lights, features a different wheels, and is available only in Gris Iceberg.

In the demo's of Gran turismo 2 The car had a gold color, This was removed in the final game 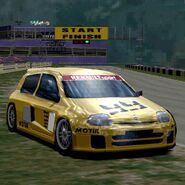 A Clio Renault Sport V6 24V '00 with racing modifications applied. This is the first of the two racing schemes available. 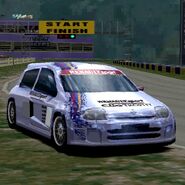 A Clio Renault Sport V6 24V '00 with racing modifications applied. This is the second of the two racing schemes available.

The Clio Renault Sport V6 24V '00 as it appears in Gran Turismo 4. The license plate now says "Clio V6" instead of "Clio Renault Sport". This text was retained in subsequent games, though the background color was changed to white in the PS3 games.