Shelby American, Inc., or simply Shelby, is a company formed in 1962 by racecar driver Carrol Shelby formed to build high-performance parts and motor vehicles. He teamed up with AC Cars of Bristol to build the Cobra, which had a Ford V8 engine. The company has built many classics, including the 427 S/C Cobra, the GT350/GT500 based on a Ford Mustang, and their first production car, the Shelby Series 1, was introduced in 1998. 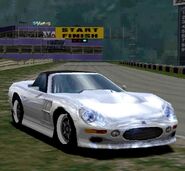 Retrieved from "https://gran-turismo.fandom.com/wiki/Shelby?oldid=137001"
Community content is available under CC-BY-SA unless otherwise noted.