The Shelby Cobra 427 '66 is a road car produced by Shelby. It appears in every main Gran Turismo game to date since Gran Turismo 2. Although not initially available in Gran Turismo Sport, it was later introduced as part of Update 1.06, released on November 27, 2017.

There have been several different colors available for this car. They are listed per game below.

The colors are unnamed in these games:

"The icon of American sportscars, powered by a large displacement engine."

The Shelby Cobra competed in the FIA Speed World Challenge, a world endurance championship that differed from GT-class racing because there was no limitation on engine displacement.

To defeat the rival, Ferrari, in this series, the folks at Shelby American fitted a large displacement engine into their race car, which came in the front of the 7.0-liter 427-cu.-in. "Side Oiler", a pure purpose-build racing engine. Thus, the development of the Shelby Cobra 427 was under way, starting near the end of 1964. The first prototype was complete in the spring of 1965.

One problem that immediately arose during development was the strength of the chassis, or lack thereof. In comparison to the 345 BHP produced by the 289 engine, the 427 Side Oiler's 493 BHP was simply too much power for the existing setup. Phil Remington, in charge of design at Shelby America, determined that the suspension was the car's weakest link, so the side-mounted leaf suspension was abandoned in favor of a conventional double wishbone with coil dampers.

The Shelby Cobra cleared its 100 unit minimum production requirement and acquired FIA homologation. The car first competed in the SCCA A production class at the opening of the 1966 season. In the end, 348 Shelby Cobra 427s were built with 88 of them being competition spec models or test cars. The 427SC is a road-going model with competition spec equipment. Only 31 of these examples were built.

The Premium appearance of the Cobra in GT5 and GT6. 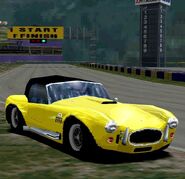 The vehicle banner as it appears in GT2.

The vehicle banner as it appears in Gran Turismo 4.