The 1996 Suzuki Escudo Pikes Peak Version is a hillclimb rally car produced by Suzuki. It only appears in Gran Turismo 2, being replaced by its 1998 version in subsequent titles. It is based on the #6 car driven by Nobuhiro "Monster" Tajima.

The following description is taken from the PAL version of Gran Turismo 2:

Japanese racing driver 'Monster' Tajima enjoys mountaineering. But not for him is the world of crampons, ice picks and frost-bitten crawling up sheer inclines. No, 'Monster' does his mountaineering from the wheel of a 995bhp[1] Suzuki Escudo. 'Monster' is the multiple winner of America's legendary Pike's Peak Auto Hill Climb event, having previously shot to the top of the 20km course in mad twin-engined versions of both the Suzuki Cultus (or Baleno in Europe) and Escudo (or Vitara, as it's also known). After winning (again) in 1996[2], 'Monster' was given a new tool to go tackling the peak in. Instead of engines front and rear, this new generation Escudo racer packed just one. Thankfully, it was a biggy. At the Escudo hill-climb car's heart is the 2.5-litre six-cylinder engine from stock Escudos, itself the largest engine available for the model. From here the modifications start. The mid-mounted powerplant boasts a pair of turbochargers, squeezing out that awesome near-1,000 horsepower maximum output.
This in turn is fed through a rapid-shifting six-speed sequential gearbox. To give the Escudo some hope of clinging on to the frighteningly steep Pike's Peak route, a four-wheel drive system is fitted. The suspension utilises double wishbones at both front and rear. Meanwhile well up to the task of reigning in some of those horses for the course's 156 turns are carbon disc brakes capable of coping with extreme punishment, matched up to hard-grabbing eight-pot callipers at the front and four-pot items to the rear. The Escudo racer is a big car, over five metres long thanks to a huge airfoil at the rear boosting high-speed stability. Like its predecessors, however, it is extremely light, sitting on ther scales at just 800kg thanks to a sophisticated aluminium spaceframe chassis. Ok, enough of that. See you at the top!

This car can be purchased from the special section of the Suzuki dealership for 2,000,000 Credits. 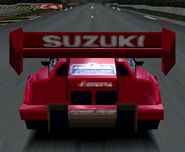 The 1996 Escudo as it appears from the rear. Note how this differs from the 1998 car with two smaller openings rather than one large one
Add a photo to this gallery

Retrieved from "https://gran-turismo.fandom.com/wiki/Suzuki_Escudo_Pikes_Peak_Version?oldid=143624"
Community content is available under CC-BY-SA unless otherwise noted.