Edit
watch 02:59
Metroid Dread - The Loop
Do you like this video?
Play Sound

Sector 1 is a short section from the start/finish line to just beyond turn 1.

Sector 1 begins on Route 246, beginning with a 600m straight before heavy braking for the first corner. Turn 1 is a tricky 90-degree right hander with tyre-barriers on both inside and outside. There is a small amount of pavement on the outside which can be used as runoff. In most cars, expect to understeer under braking into the corner. More powerful, rear-wheel drive cars are also prone to oversteer on exit. Plenty of time can be gained or lost here, so a good exit is essential. The short first sector ends around 100m after this corner.

Sector 2 runs from before turn 2 to just after the chicane of turn 6/7. It is almost a mile and a half long.

Turn 2 is a tight left-hander which directly leads into the right-hand turn 3. The corner can be cut on entry to turn 2, but is ill-advised as it will compromise entry to turn 3. A better line involves skirting the kerb of 2, and taking plenty of kerb into 3. This gives a better exit speed for the short straight leading to turn 4. This straight takes the circuit past the Jingu baseball stadium and Tokyo Olympic stadium.

Turn 4 is a long, right-hand parabolic corner. Taken at medium speed in most cars, this turn can take around 10–15 seconds to traverse, so good control and steady throttle application are necessary to maintain good speed. Overtaking can be very difficult here, as there is only one racing line. A short straight follows leading to turn 5.

Turn 5 is a tricky left hander which appears to be a double-apex corner. However, turning in too early can bounce a car into the outside barrier. Instead, a better line avoids the first apex, instead hitting the second. The fairly long straight that follows means that good exit speed will lead to a good sector time.

After this straight is a right/left chicane. The first part can be taken flat out, but most cars need to brake in the short gap before the left-hander. Taking some kerb on the inside can give a good exit, but too much will rebound the car into the opposite wall. The end of sector 2 stands just beyond the chicane.

Sector 3 runs from turn 8 to the finish line. It is generally fairly fast but also contains the slowest corner on the circuit, turn 12. Sector 3 measures around 1.3 miles

Turn 8 and 9 are two 80-degree right-handers which form a single, double-apex corner. The circuit then proceeds downhill, twisting left, right then left again and passing under the overpass of Expressway #4 and into a complex junction. Here, the track turn sharply to the right (Turn 12). This slow corner is the slowest and, possibly, trickiest corner on the circuit. The corner leads out onto the main straight, so a good exit is essential. The following straight is over a mile in length, with the finish line two-thirds of the way along. It is punctuated by a slight right-left chicane that is taken easily at lower speeds, but in a fast car can prove tricky. The pit-lane is on the right-hand side of the main straight, and runs almost for the straight's entire length.

Tokyo R246 has no sub-circuits in Gran Turismo, but is available in reverse in all games.

The race begins with all six cars stationary. Therefore qualifying is not so important for this track. 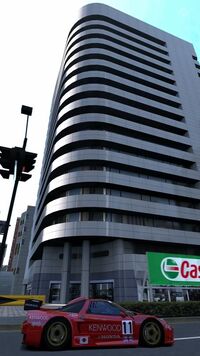 The hidden bronze-level trophy, Take Your Honda Home, is awarded for taking a photo of a Honda passing in front of the Honda offices building in Tokyo, located about 400 yards past the start/finish line on the Tokyo R246 circuit.

The Tokyo circuit is set on actual roads in the Shibuya district of Tokyo. Using roads such as R246 and Expressway #4, the circuit can actually be driven in real life.

The circuit imprinted onto a real life map 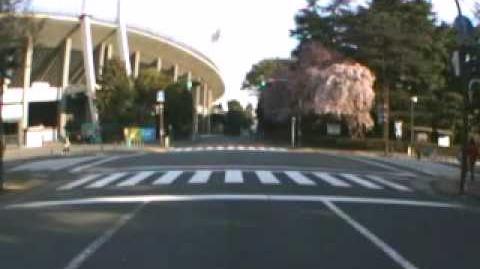 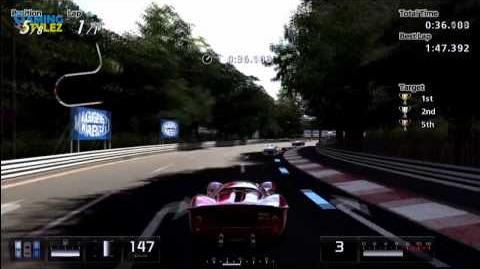