Edit
watch 02:17
New Pokemon Games - The Loop
Do you like this video?
Play Sound

Tourist Trophy: The Real Riding Simulator is a 2006 motorcycle racing game. It was published by Polyphony Digital, the same developer that created the Gran Turismo auto racing series, and produced by Kazunori Yamauchi. Overall game design and direction was undertaken by Takamasa Shichisawa. The game engine was based on the one used for Gran Turismo 4, with several modifications to accommodate the new features. Tourist Trophy is one of only four titles for the PlayStation 2 that is capable of 1080i output.

Just like in Gran Turismo 4, the player can choose from an available selection of motorcycles and tracks, and start a single race against three AI opponents. More bikes and tracks can be unlocked by winning events in TT Mode, Tourist Trophy's version of the well-known "Simulation Mode".

Again, like all Gran Turismo games, TT Mode requires the player to obtain progressively more difficult licenses to enter events and win new motorcycles. However, there is no Credits system in this game. Instead, players will win new bikes by placing first in championships and beating events in Challenge Mode (though unlike cars, bikes cannot be sold). Just like Gran Turismo 4, progressing in this game mode will unlock new bikes and tracks for use in the Arcade Mode.

Exclusive to the NTSC-U release. This mode contains a larger array of options to customise gameplay. Options include: "Strict Judgment", a 10-second speed penalty, similar to the mechanic seen in Gran Turismo 4 Special Conditions events; and the ability to display the "Best Line", a colored line appearing on the course assisting the player in determining the fastest route around the course.

Events that will test the player's skill and response. These small races and challenges will award the player with new motorcycles if they are beaten.

Similar to the license tests from the previous games, player will gradually advance through small tests designed to challenge the player's skill and coordination. Just like the Gran Turismo series, obtaining all gold trophies on a particular license will award the player with a unique motorcycle.

Screenshots can be taken from race replays and saved on a memory card or connected USB flash drives, like in Gran Turismo 4. This feature is known in-game as "Best Shot". Using various replay angles as a digital camera, the game is able to produce a selection of screenshots with a variable compression rate (Normal/Fine/SuperFine) and size (up to 1280x960/72 dpi). The player can choose to save or print with an Epson compatible USB printer, or display it on the television screen using the "Musical Diorama" feature.

Unlike "Best Shot", the "Photo Mode"' parameters are fully adjustable. It gives the player the opportunity to entirely customise photos by tuning various parameters such as camera angle or course section.

Unlike any Gran Turismo game, Tourist Trophy included a feature where the player could download other players' race replays, or "ghosts" onto a USB flash drive. It was then possible to view the downloaded replay in the included "Theater Mode", or use it as a ghost opponent in the "Time Attack" mode. The first replay files released on the official Japanese website featured a Famitsu[1] journalist, Japanese pro rider and Tourist Trophy test rider Satoshi Tsujimoto, and Tourist Trophy producer Kazunori Yamauchi.

This is a list of featured motorcycles featured in Tourist Trophy. The North American version add 7 motorbikes, while the European adds other 3 bikes, for a total of 135.

This lists all circuits featured in Tourist Trophy, unique configurations are noted by an asterisk:

The Tourist Trophy original soundtrack as it appears in all versions of TT:

Composed by: Sun Paulo and Makoto

The game received "average" reviews according to the review aggregation website Metacritic. In Japan, Famitsu gave it a score of four 8s for a total of 32 out of 40. Tourist Trophy won IGN's award for Best PS2 Simulation of 2006. 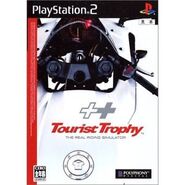