The Toyota 2000GT '67 is a Road car produced by Toyota. It appears in every main game of the series since Gran Turismo 2, with the exception of Gran Turismo 3: A-Spec. Although not initially available in Gran Turismo Sport, it was later introduced as part of Update 1.11, released on January 26, 2018.

In Gran Turismo 2, this car is available in five color schemes:

However, starting from Gran Turismo 4, only three color schemes are available for this car:

"A dream car in Japanese automotive history, full of originality in both style and mechanism."

Called Japan's first exotic or supercar by some, the Toyota 2000GT was certainly revolutionary as far as Japanese cars went. The smooth, flowing lines of the 2000GT were reminiscent of Ferraris of the day, and it was built on a backbone chassis, which was used extensively by Lotus at the time.

Underneath its long hood was a 2.0-liter DOHC inline-6, based on the top-of-the-line Crown powerplant, which produced 147 BHP. This engine was jointly developed by Yamaha. The famous motorcycle/musical instrument maker also provided the wood grain on the car's dashboard with materials it used for its world-class pianos.

The car's suspension was also first rate, with double wishbones at both front and rear. But the Toyota 2000GT was not all about beauty. This highly tuned machine was able to win several times on the Fuji Speedway and Suzuka Circuit, even establishing the international speed record on the Yatabe test course going as fast as 136 mph. Two special convertible versions were produced for the James Bond movie, "You Only Live Twice," giving the Toyota sports car worldwide appeal.

Sales of such a high-end sports car were not stellar, especially one with a price tag of 2,380,000 yen, which was twice as expensive as the luxury model Crown, and Toyota was faced with the hard reality of ceasing the car's production after making only 300 cars.

The player can purchase this car in the Toyota Used Car Dealerships for around 110,000-120,000 Credits. It is the most expensive used car available in the game. This car is incorrectly referred to as Toyota 2000GT GT '68 in the NTSC-U version of the game.

This car can be bought at the Toyota Legendary Cars Dealership for 160,000 Credits.

The Toyota 2000GT '67 can be purchased from the Toyota dealership for 160,000 Credits. It now has a detailed interior.

This car can be purchased in the Toyota section of Brand Central for 160,000 Credits. 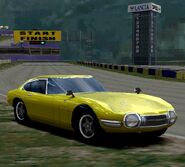 The Toyota 2000GT '67 as it appears in Gran Turismo 2. In this picture is displayed the Gold color scheme, only available in that game. Also, the car lacks the front license plate. 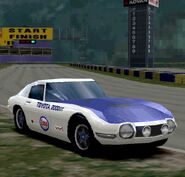 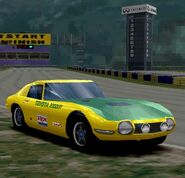 A Toyota 2000GT '67 with racing modifications applied (NTSC-U version of Gran Turismo 2). Due to the non-existence of Esso in the United States, all the references to Esso are changed to Exxon. The liveries colour scheme would be later re-used in GT Sport. (See below)

The Toyota 2000GT '67 as it appears in Gran Turismo 4. The license plate of the car originally had black text on a white background.

The Toyota 2000GT '67 as it appears in Gran Turismo 6. The license plate is now white text on a black background as opposed to black text on a white background.

The vehicle banner as it appears in the NTSC-J and PAL versions of Gran Turismo 2.

The vehicle banner as it appears in the NTSC-U version of Gran Turismo 2, note the erroneous "GT" title printed twice here.
Add a photo to this gallery

Retrieved from "https://gran-turismo.fandom.com/wiki/Toyota_2000GT_%2767?oldid=156759"
Community content is available under CC-BY-SA unless otherwise noted.