The Toyota ARISTO V300 '97 is a road car produced by Toyota. It only appears in Gran Turismo 2, being replaced by its 2000 equivalents in later games.

The Lexus GS range was Toyota's first attempt at a mid-size luxury motor and when it was launched it received favorable reviews. Toyota didn't rest on their laurels however, and in 1998 the car got a complete makeover. Badged as an Aristo in Japan, the GS comes with different engines to suit its different markets. In Japan (on the Aristo) there is the choice of a normally-aspirated or twin-turbocharged three-litre V6. The former produces 230bhp while the latter an even more impressive 290bhp. Both engines boast VVT-i variable valve timing technology. In Europe meanwhile, the GS300 comes with the normally-aspirated V6 (but with only 218bhp) while America gets a four-litre V8 bruiser with 300bhp. All the Aristo and GS models boast decent performance, with even the European three-litre version managing to turn in a 0-60mph time of 8.7 seconds and a top speed of almost 140mph. The standing quarter mile time meanwhile, is dispatched in just 16.6 seconds. The performance of the Lexus is helped greatly by the use of a five-speed automatic gearbox that's extremely adept at extracting all the high-revving performance from the engine. For a big car the GS is a sporty handler. Its double-wishbone suspension all around provides it with the kind of sure-footed handling and agility normally only found in a car half its size. Grip from the 225/55R16 tyres is high too. As if all that wasn't enough, ABS-equipped disc brakes all around ensure that if you do overcook it on a corner, you will at least be able to stop before you hit the crash barrier. As big luxury cars go, there's few that will offer the on-track performance and thrills served up by the Lexus.

This car can be bought at the Toyota New Cars Dealership for 43,600 Credits. 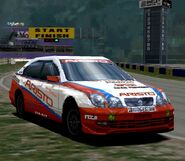 Retrieved from "https://gran-turismo.fandom.com/wiki/Toyota_ARISTO_V300_%2797?oldid=137267"
Community content is available under CC-BY-SA unless otherwise noted.