The car appears to be the #1 driven by Didier Auriol, who would later get disqualified from the 1995 WRC season.

"The rally machine that left an impression on many fans, though it only competed for a short time."

The Celica ST205 had big shoes to fill. After its predecessor, the ST185, handed Toyota a "double title" (winning both Driver's and Manufacturer's Championship the same year) in 1993, Toyota introduced this new Celica. On paper, the ST205 was markedly better than the old. It had better weight distribution, thanks to a longer wheelbase and wider track, and improved aerodynamics.

The Celica was scheduled to run in 1994, but it ended up making its WRC debut in 1995. In its first few races, the Celica battled with the newly improved Subaru Impreza for the points lead, and Didier Auriol brought home the first win in the 4th round at the Tour de Corse. But for most of the season, the Celica experienced recurring suspension problems, making it difficult for TTE to consistently finish in the points. In the 7th round at Catalonia, the Celica was found to be in violation of the intake restrictor diameter regulation and was stripped of all points for the season. Toyota, angered at this decision, pulled out of the WRC, thus ending the ST205's racing career after just one season.[1]

Although it was only active for a short time, the ST205 proved itself to be a mighty force in the WRC, winning over many fans. When discussing Toyota's rally heritage, the ST205 is one car that must be mentioned.

This car can be won by winning the Tahiti Rally Challenge, on the rally races section.

This car can only be obtained by winning the Swiss Alps Rally on Medium.

The player can unlock this car after getting a time of 1:33.000 or better in Time Trial with the Nissan SKYLINE GT-R V • spec II (R32) '94. A tuned version of this car is also available upon clearing Time Trial with all cars in the game.

As a Premium car, the Toyota CELICA GT-FOUR Rally Car (ST205) '95 can be purchased from the Dealerships for 350,000 Credits. It is a Level 11 car. A Standard version of this car can be imported from Gran Turismo PSP, but its use is limited to Arcade Mode only.

The Toyota CELICA Rally Car (ST205) '95 as it appears in Gran Turismo 3: A-Spec. It is a World Rally machine with mud guards, roof scoops, and antennae, but with 6-spoke Rays wheels as opposed to the traditional O.Z. 5-spoke ones. It has a driver number with a Polyphony Digital logo on a black background above it, as well as a license plate on the back which says "K-AM 5362". 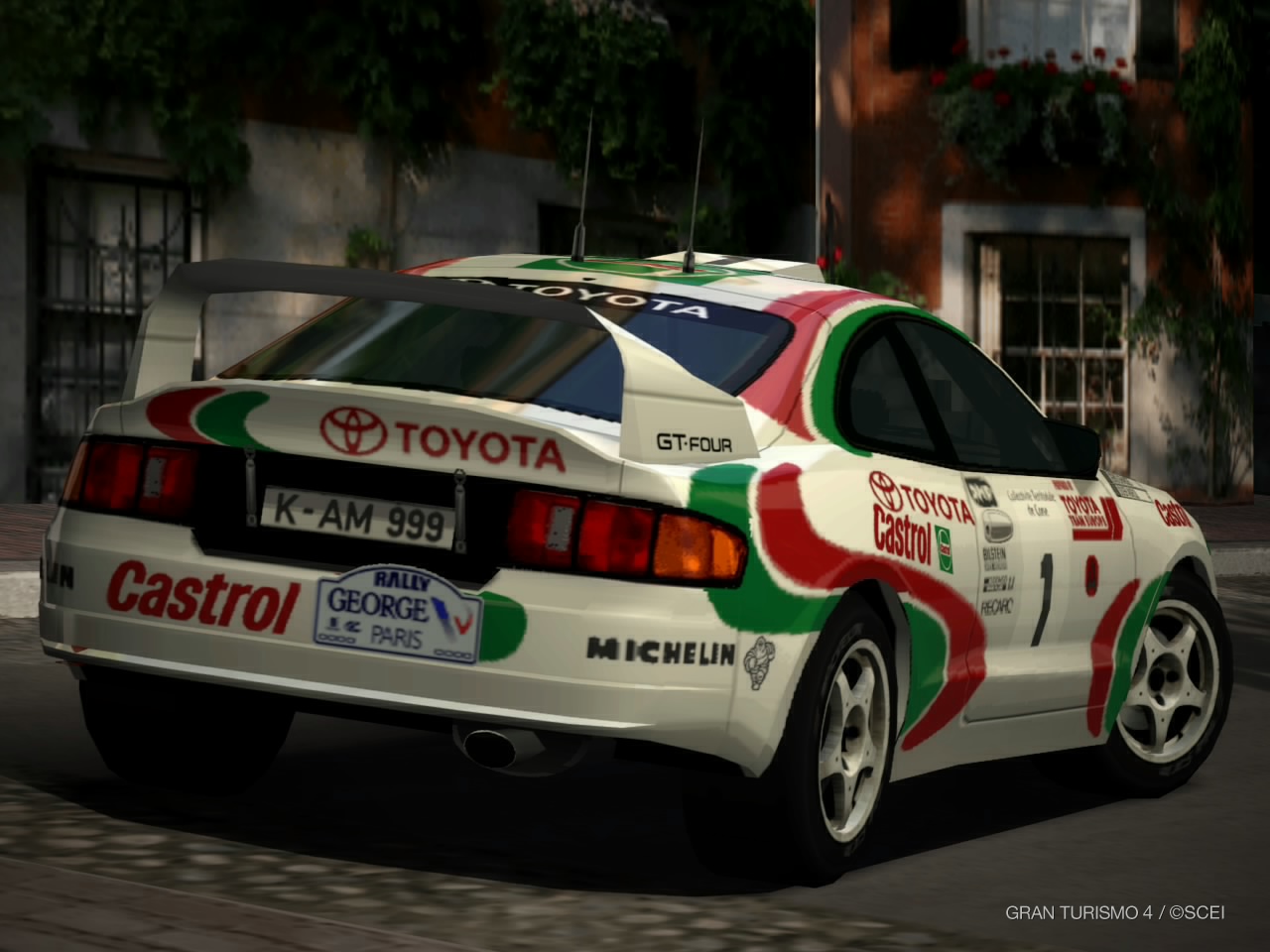 The back of the Toyota CELICA Rally Car (ST205) '95 as it appears in Gran Turismo 4. Its license plate now says "K-AM 999" and has a George V Rally sticker next to the Castrol logo on the rear bumper.

The Premium version of the Toyota CELICA GT-FOUR Rally Car (ST205) '95 as it appears in Gran Turismo 5 and Gran Turismo 6 when viewed from behind. There is now a white-on-black Gran Turismo logo above the driver number. The license plates now say "K-MA 205". Also, the George V Rally sticker is now replaced with the Gran Turismo Rally sticker.
Add a photo to this gallery

Retrieved from "https://gran-turismo.fandom.com/wiki/Toyota_CELICA_GT-FOUR_Rally_Car_(ST205)_%2795?oldid=154922"
Community content is available under CC-BY-SA unless otherwise noted.