The Toyota COROLLA Rally Car '98 is a Race car produced by Toyota. It appears in every main Gran Turismo game to date since Gran Turismo 2, with the exception of Gran Turismo Sport.

The car appears to be the #9 driven by Didier Auriol, who achieved a 5th place finish in the 1998 WRC season Driver's Championship. From Gran Turismo 3: A-Spec onwards, the car is shown with livery used at 1998 Rally Catalunya.

"The WR car that marked Toyota's return to the WRC through its great performance."


In 1997, the Corolla WRC was Toyota's new weapon in bringing the company back to its former WRC glory days. This car was basically the old Celica rally car that was stuffed into a compact European-spec Corolla body. It inherited the Celica's 3S-G 2.0-litre turbo engine and also featured an advanced X-Track 6-speed sequential transmission.

Toyota began race testing the new compact car in the 5th round of the 1997 series, and made its official debut in the 10th round of that year in Finland. Its first full year was in 1998, as the Corolla got off to a quick start, winning the season opener in Monte Carlo with Carlos Sainz behind the steering wheel. Sainz finished second in the Driver's Championship and Toyota placed second in the Manufacturer's Championship.

Toyota, not satisfied with this result, made improvements to the car, most notably to weight distribution and reliability. The following year, a new, improved model was introduced (at the 4th round). The new Corolla was more stable and more durable than its predecessor. Although this season ended with only one victory (at the 11th round in China), Toyota consistently finished in the points and ended up winning the Manufacturer's Title that year. Although the Corolla brought the company back to the top of the WRC, the company pulled out of the rallying in 1999 to partake in a new race venture, Formula 1.

This car can be bought at the Toyota Special Cars Dealership in East City for 500,000 Credits. It is also one of the starting rally cars in Arcade Mode.

This car can be bought at the Toyota Dealership for 300,000 Credits. It can also be won by completing the Tahiti Challenge II event.

This car can be bought at the Toyota Legendary Cars Dealership for 750,000 Credits.

As a Standard car, the Toyota COROLLA Rally Car '98 can be purchased from the Used Car Dealership for 292,569 Credits. It is a Level 11 car.

The Toyota COROLLA Rally Car '98 in the Demo versions of Gran Turismo 2. For some reasons, the MoviStar logos are replaced with indecipherable blocks. 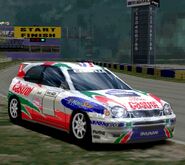 The Toyota COROLLA Rally Car '98 as it appears in the Final version of Gran Turismo 2. Here, the MoviStar logos are normally present without any form of censorship.

Retrieved from "https://gran-turismo.fandom.com/wiki/Toyota_COROLLA_Rally_Car_%2798?oldid=150718"
Community content is available under CC-BY-SA unless otherwise noted.