The Toyota WOODONE TOM'S SUPRA '03 is a Race car produced by Toyota. It first appeared in Gran Turismo 4 Prologue, and has returned in every main game since, with the exception of Gran Turismo Sport.

The car appears to be the #36, driven by Érik Comas and Takeshi Tsuchiya, who achieved a 5th place finish in the 2003 JGTC Season.

"This Supra from Tom's contested the 2003 race season with a large-displacement engine."

Toyota's semi-works team and aftermarket-tuning specialist, Tom's, is a major player in Japan's racing world. Until 2002, the race Supra used by Tom's for the Japan Grand Touring Car Championship (JGTC) were equipped with turbocharged inline-4s, but in 2003 Tom's decided that the potential of the 3S-G in terms of fuel usage, power output, durability, and running costs was maxed out, so the engine was replaced.

The new engine was basically the same 4.3-liter DOHC V-8 3UZ-FE unit used in the Lexus LS 430. However, noting that restrictor-plate regulations for big displacement naturally-aspirated engines like the 3UZ-FE were somewhat vague in the JGTC, Tom's increased the displacement of the powerplant to 5.2 liters before stuffing it into the Supra's engine bay. Other new regulations allowed Tom's to replace the front and rear frames of he new model Supra with purpose-built pipe frames. The transmission was also separated from the engine and integrated with the differential creating a transaxle setup. These changes gave better longitudinal weight distribution and greatly improved maneuverability. The tradeoff was reduced aerodynamic performance compared to the previous year's model, but Tom's showed its mettle with impressive results at the Sportsland Sugo and Fuji Speedway races, and even took pole position on the road course at Twin Ring Motegi, one of the most difficult tracks to get the ideal set up.

The player can unlock this car by completing the lesson #38 in the Driving School area.

This car can be bought at the Toyota New Cars Dealership for 1,350,000 Credits. 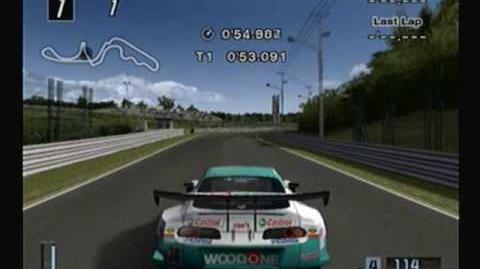 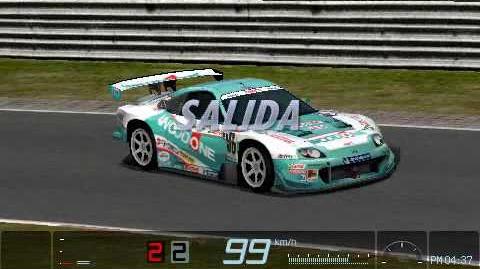 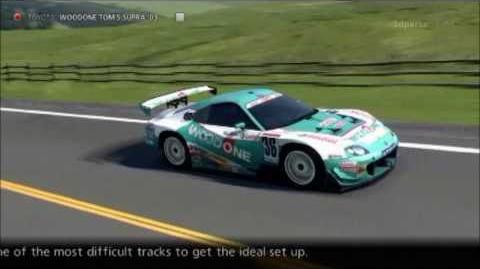 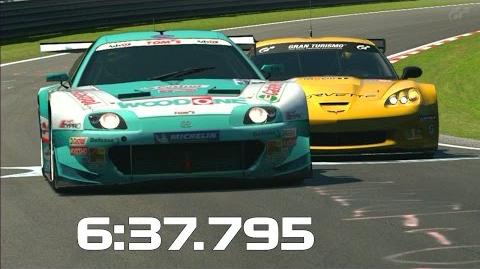 Retrieved from "https://gran-turismo.fandom.com/wiki/Toyota_WOODONE_TOM%27S_SUPRA_%2703?oldid=152950"
Community content is available under CC-BY-SA unless otherwise noted.