Edit
watch 02:34
Fire Emblem Warriors: Three Hopes - The Loop
Do you like this video?
Play Sound

In Gran Turismo 7, the circuit has undergone full renovation. As the result, the full length of the circuit was increased to over 5 kilometers.

The circuit begins with a fast, uphill left-right series of bends in which most cars are able to be driven through full throttle. Provided that the ideal line is taken through Turn 1, it is actually possible to drive straight through Turn 2 without having to actually steer the car and provide a good setup for the entry of Turn 3. Turn 3 is a little bit trickier than the first two corners, as the player has to brake for it to avoid running off the track on exit. Depending on the car, as well as the line taken through Turn 2, the car may arrive at the braking point with less than ideal weight distribution - sometimes the car will have too much weight on its nose, making oversteer more likely, and other times there won't be enough weight in the front, which could lead to understeer. Thus, especially in faster cars, carefully managing the brake, gas and clutch pedals is crucial to keeping the car in shape.

The next turn, Turn 4, is where we arrive at the first tunnel on the track. Due to this, it is a blind corner, so players may want to take it easy the first few times around in order to familiarize themselves with it if they haven't already. Also, there is a slight hill in the middle of the corner, which means that most of the time the car will understeer here, so cutting into the corner early and getting to the inside of the turn can help the player's lap time by up to a few tenths of a second. As well, on the exit of the tunnel there is a sharp drop of about six inches, so some of the faster cars can actually leave the ground here. In that case, it is best to leave the corner with the car as straight and level as possible to minimize the risk of a spin.

The ideal line through Turn 5 is to go to the far left hand side of the track, brake hard and cut in late. This is a late-apex turn (meaning that the tightest part of it is more than halfway through it), so the late entry is necessary in order to clip the apex correctly and still leave the turn on the best line to set up for Turn 7. Turn 6 is nothing more than a slight kink in the short straightaway linking Turns 5 and 7, but it can still be enough to mess up the entry to Turn 7 a little if the player leaves Turn 5 with the car too far to the left, making a good exit from that turn all the more important to a good lap.

Turn 7 is one of the most important turns on the track, as transitioning from it to Turn 8 well can shave up to a second off of a lap, and possibly even more. Therefore, one should get to the right side of the track and stay there all the way through it. Turn 8 is a very highly banked, downhill left-hand corner, so the entry of it is very late. Coming at it from Turn 7, the player should wait until they are about halfway through the short tunnel, then brake briefly but hard, and cut very hard into the corner. Ride through the yellow-striped area from the exit of the second tunnel to the entry of the third and final one, and then let the car drift out as much as possible on the exit of the corner without hitting the wall on the right side; doing this will conserve momentum for the backstretch and provide an ideal setup for Turn 9.

The long, hilly back straight on this course provides for excellent drafting and overtaking opportunities heading into Turn 9; however, some of the faster cars in each game will lift the front end up to a few feet off of the ground, which could possibly upset the balance of the car and end in an accident in Turn 9, so especially when slipstreaming, eagerness must be tempered with caution. As a general rule, LMP cars are very susceptible to this, while most GT and Formula One-style cars tend to hold the track better. As well, players may want to keep an eye out on the exit of the tunnel for slower cars, since it is only possible to see a few yards past the end of the tunnel due to the steep hill immediately thereafter.

The approach to Turn 9 is very early; one of the earliest in the series. At the crest of the hill (or slightly after it), the driver should begin angling towards the yellow-striped area (the apron) of the turn, and begin braking about 25 yards from the start of the apron. Done correctly, the car should be able to ride the black line (the groove, where the most grip is) throughout the corner. The best place to cease braking is right when the groove touches the left-hand side of the track. The turn's apex is right in the middle of it, so that is a good place to start rolling back into the throttle.

Follow the black line through the exit, but be sure to leave about a car width on the right-hand side; this will allow one to switch over to the left more quickly in order to set up for Turn 10. Go through Turn 10 wide open, and then exit as early as possible for Turn 11. At the apex of Turn 11, begin braking, and turn into Turn 12 as early as possible. Once again, ride the white line through the turn, and then, once past the apex, swing out to the curb on the left-hand side. On the short, steeply downhill straight that follows, switch over to the right side of the track to set up for Turn 13.

Once at the bottom of the hill, brake hard and turn in sharply to clip the apex of Turn 13. On its exit, swing the car out sharply to provide the entry for the final chicane which leads to the start-finish line.

This chicane has a reputation for being one of the hardest and most dangerous turns in the entire series, due to the very steep hill on the right side of the last turn in it. If one enters the chicane too fast, the car will drift to the right side of the track, and in many instances, will run over the hill, leading either to a spectacular save or an equally spectacular crash. Yet done right, it can provide a crucial bit of momentum through the start-finish straight, which can then be carried through almost all of the first sector of the track on the next lap; therefore, doing it correctly is absolutely critical.

The player should begin by getting the car as close to the right-side wall as they can, watching for the groove to angle towards the first in the series of two turns. Follow it. As the player turns in, they should let off of the throttle and begin riding the brakes ever so slightly. Right at the apex, switch over and angle towards the curb on the last turn. Precision is absolutely key here. Barely clip the curb at the corner's apex with the right-side wheels, and then swing the car gently out to the left. On the start-finish straight, switch the car over to the right again to set up for Turn 1.

In Gran Turismo 7, the final chicane has been changed. While the technique and approach is the same, the corners themselves are further apart with the penultimate corner being much tighter than before. Ideally, you want to take a line that clips the apex of the first turn of the chicane and keeps to the inside, giving you the ideal line for the subsequent turn in order to gain speed going onto the main straight.

The final corner of the Trial Mountain Circuit is an ideal place to gain the hidden bronze-level PSN trophy "Rollover". By cutting the right-hander close enough to the wall (see video, right), the car can be sent into a barrel-roll. Landing the car roof-first for the first time will award the player with the trophy. 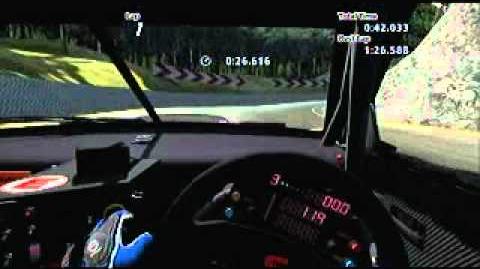