The Vauxhall Calibra Super Touring Car '94 is a Race car produced by Vauxhall. It appears in every main Gran Turismo game to date since Gran Turismo 2, with the exception of Gran Turismo Sport.

"A monster on the circuit that combines the newest aerodynamics with a 4WD system."

Opel entered the Calibra V6 in the final race of the 1993 DTM season (Deutsch Tourenwagen Masters) at Hockenheim. It earned championship points on its first time out, providing onlookers with an indication as to what was to come.

The Calibra's chassis was developed by the Joest Team, past winners of numerous 24 Hours of Le Mans races. The Cosworth-tuned 2.5-liter turbocharged V6 produced 414 HP, with the power transferred to all four wheels. The 2-door coupe was fitted with wide fenders to accommodate its meaty tires. A large front spoiler and rear wing were also included. Even the unseen underbody was specially molded to take advantage of ground effects.

The car was driven by Manuel Reuter and former Formula 1 World Champion Keke Rosberg. In 1994, John Winter joined Rosberg and Reuter forming a three-man team. The Calibra had its best year in 1996, when the DTM merged with the ITC (International Touring Car Championship). The Calibra received an engine power boost to 493 HP and Reuter won three out of 26 races to claim the Driver's Title. Other Opel members drove well, with a total of five drivers ranking in the top ten. However, at the end of the year Opel decided to withdraw from the ITC, and the series itself ultimately came to an end not long thereafter.

The player can purchase this car in the special section of the Vauxhall dealership for 1,000,000 Credits. The car is only available in the PAL version of the game, and cannot be bought if the game language isn't set to English.

This car can be won by winning the Gran Turismo World Championship in Professional Events. Like in GT2, the car is only available in the PAL version of the game, and cannot be acquired if the game language isn't set to English. It is also mispelled "Caribra" Touring Car in the game.

This car be purchased from the Vauxhall Dealership for 1,750,000 Credits. Like in GT3, this car is only available in the PAL version of the game.

As a Standard car, the Vauxhall Calibra Super Touring Car '94 can be purchased from the Used Car Dealership for 1,467,953 Credits. It is a Level 15 car. 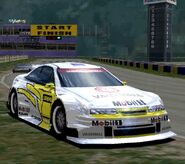 The Vauxhall Calibra Super Touring Car '94 as it appears in Gran Turismo 2. Note the different logos on the front bumper and the absence of the driver number. Also, there is a DEKRA logo above the car number box. However, said logo was removed in later games. 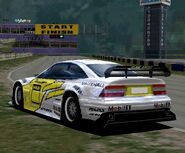 The rear of the Vauxhall Calibra Super Touring Car '94 in Gran Turismo 2. Notice the absence of the Vauxhall and Michelin logos, as well as the different text on the rear wing.

The rear of the Vauxhall Calibra Super Touring Car '94 in Gran Turismo 5.

Retrieved from "https://gran-turismo.fandom.com/wiki/Vauxhall_Calibra_Super_Touring_Car_%2794?oldid=150809"
Community content is available under CC-BY-SA unless otherwise noted.