"A compact masterpiece, packing the essence of a coupe into a minimum body size."

Small yet charming, the Opel Tigra was a compact coupe produced by General Motors' German division and marketed in the U.K. under the Vauxhall banner. The Tigra stood out for its small dimension and quirky exterior styling that was somewhat reminiscent of Japan's kei cars.

The Tigra, based on the second generation Corsa, made its debut in 1993. It was designed by Opel's Japanese designer, Hideo Kodama, who also penned the Corsa. In Europe, the Tigra came with either a 1.4-liter or 1.6-liter DOHC 16-valve inline-4. In Japan, only the 1.6-liter engine was offered. Output for the 1.4-liter was 89 HP, while the 1.6 produced 105 HP. The engines were mated to a 5-speed manual gearbox or an electronically-controlled 4-speed automatic.

The 2+2 Tigra shared the same platform as the Corsa, with struts up front and a trailing arm setup at the rear. Stopping power came via ventilated discs up front and drums at the rear. The Opel exhibited good ride quality, and it was obvious that the Tigra was made for touring and not hot lapping a racetrack. That said, the car's body exhibited excellent rigidity and stiffness, especially noticeable when driving over bumps. The car's appeal was further enhanced by a 2-seat convertible with a fully-automated retractable hardtop, known as the Tigra Twin Top, introduced in 2004.

This car can be purchased at the Vauxhall dealership for 25,640 Credits. The car is available only in the PAL version of the game, and cannot be bought if the game language isn't set to English.

This car can either be bought at the Vauxhall Dealership for 29,140 Credits or at the Late '90s Used Car Showroom for approximately 10,640 Credits. The price may vary depending on the mileage when bought from the Used Car Showroom. It is only possible in the PAL version of the game.

This car can be purchased for 29,140 Credits. It is a simplified car. 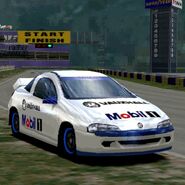 A Vauxhall Tigra 1.6i with racing modifications applied.

Retrieved from "https://gran-turismo.fandom.com/wiki/Vauxhall_Tigra_1.6i_%2799?oldid=149467"
Community content is available under CC-BY-SA unless otherwise noted.