Vector Aeromotive (now known as Vector Motors Corporation) is an American automobile manufacturer originally based in Wilmington, California. Its history can be traced to Vehicle Design Force, which was founded in 1978 by Gerald Wiegert. Vehicle production began in 1989 and ceased in the 1990s. The company was recently revived and is currently developing a new supercar. Vector is credited by some as America's first attempt to compete with European performance car manufacturers like Ferrari, Lamborghini, and Lotus.

Nearly every car produced by the company is designated the letter "W" (for Wiegert) and a number. A letter "X" after the W (e.g. WX-8) signifies a prototype unit. The only exception to this rule is the Megatech-era M12, wherein the "M" stands for Megatech and the 12 signifies its V12 engine.

Gerald Wiegert passed away on January 15, 2021. He had been developing his next supercar, the WX-8, which notably featured headlights from a fourth-generation Toyota Supra.

Gran Turismo 2 is so far the only game in the series to have featured the marque. There are three models in the game from Vector: 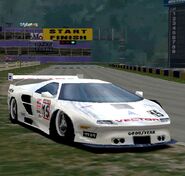