The Venturi Atlantique 400 GT is a Road car produced by Venturi. It only appears in Gran Turismo 2.

Everyone knows that the most exotic cuisine and couture comes from France, but cars too? That job is left to Venturi, a tiny company entrusted with producing the country's only supercars. Venturi has just a two-model line-up: the 400 GT, a no-compromise racer which ended up as a road car, and the Atlantique 300, a grand tourer capable of crossing continents with ease. Both cars have sleek mid-engined profiles, the 400 GT's brutally striking bodywork being crafted from a super-light Kevlar/epoxy composite, the Atlantique's from glass fibre. Both use a similar race-bred chassis layout too, with double wishbones and an anti-roll bar at the pointy end and an advanced multi-link set-up with an anti-roll bar at the rear. They also have pin-sharp power steering, though that's where any artificial driver aids end. Incredible grip is promised not only by the 400 GT's downforce-creating rear wing, but also by its 235/40 front and 295/35 rear tyres shod on 18-inch magnesium wheels. Its brakes are a bit special too, using F1-style fade-resistant carbon discs. The Atlantique isn't far behind in the stickiness stakes, rolling on 205/50 front and 255/40 rear rubber on 17-inch alloys. Stopping is provided by ventilated steel discs. The 400 GT boasts a twin-turbocharged three-litre 24-valve V6 pumping out 408 BHP at 5,400 rpm. The Atlantique also uses a three-litre 24-valve V6 powerplant with a pair of blowers bolted on top, this time producing 302 BHP at 6,200 rpm. Five-speed manual are standard in both. Acceleration leads to a risk of neck injuries in either Venturis, the 400 GT screaming from 0-62 mph in 4.7 seconds before hitting a 186 mph top speed and the Atlantique not far behind with figures of 4.9 seconds and 171 mph. France's only supercars will always remain exotic, rare and exclusive - in part because nobody's ever heard of them. Even so, everyone should want one.

The player can purchase this car at the Venturi dealership for 137,040 Credits. In addition, this car also appears in Arcade Mode as an unlockable S-Class Car. In order to unlock it, the player must win a race in Arcade Mode on Rome Short Course at normal level or higher. 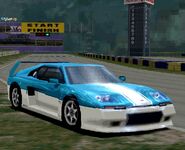 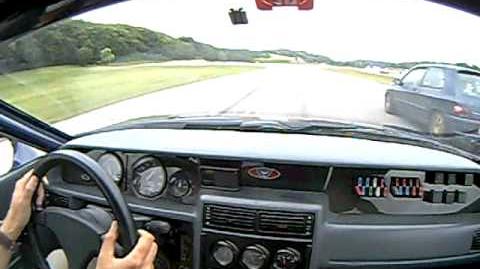 Retrieved from "https://gran-turismo.fandom.com/wiki/Venturi_Atlantique_400_GT?oldid=143634"
Community content is available under CC-BY-SA unless otherwise noted.